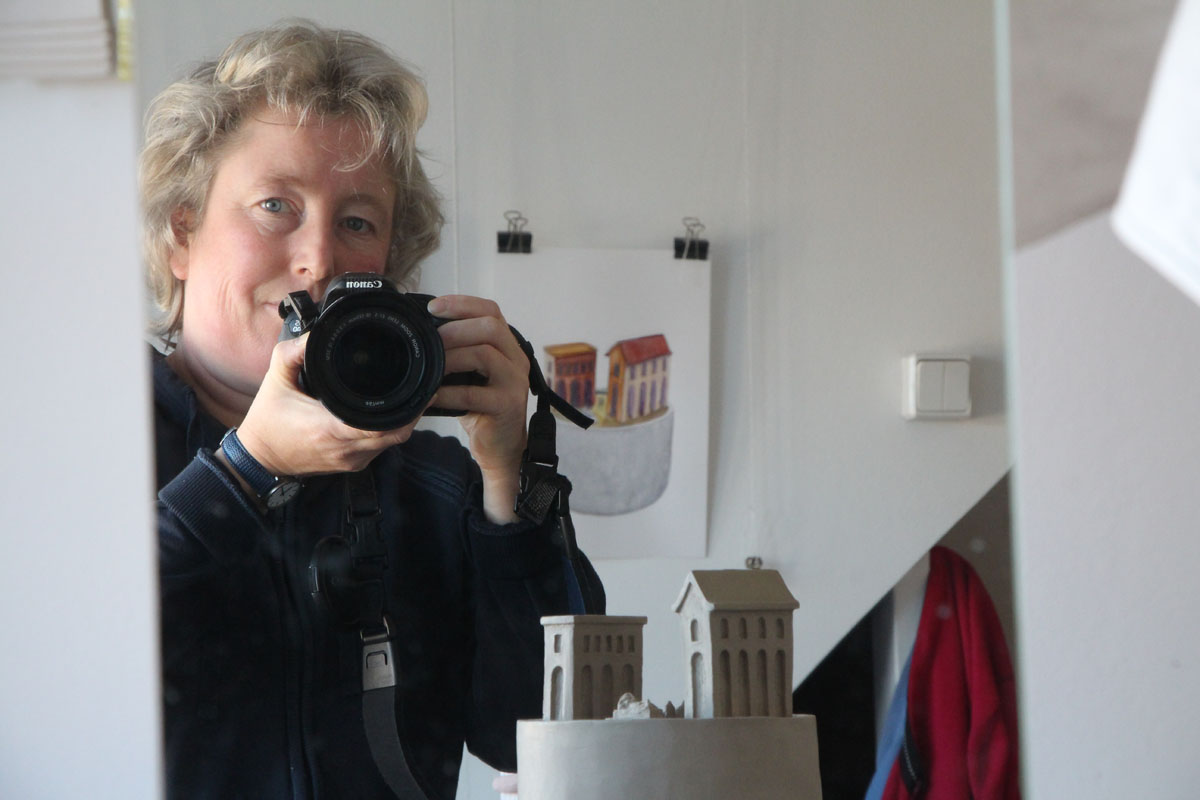 “Cooling towers of nuclear reactors to me are beautifully shaped even though they represent an industry I do not support. Traffic jams look like a string of coloured beads in a landscape. Such contradictions fascinate me. The symbolism in my work is a reflection of my questions I have about our humanity. Smoking chimneys offer me an opportunity to create amorphous shapes. The aesthetics of these shapes are in contrast with the fatal abyss we have created. My ceramic sculptures show a critical eye on society while covered in a colourful sweet sauce.”

Ilona Senghore makes ceramic sculptures. These are heated in a ceramic oven at 960 ˚C and treated afterwards with tassel glaze. Different colour tests are done to match the colours of the watercolour and pencil sketches. In a later stage the sculpture is heated for a second time at 1060 ˚C. After this it will be carefully checked and, if necessary, painted. The sculptures are designed in series. After a period of sketching, a new set comes to life. Clay needs quite some time to dry, so Ilona works simultaneously on a few sculptures at the same time. Designs that don’t fit in her oven are made of several different elements that are later fitted together.

In Ilona’s sculptures we can see a reflection on society as well as question marks she has about the relationship of humanity with its surroundings. In this relationship she sees contradictions she loves to express in aesthetic forms. However, at the same time she finds the relation questionable and problematic. She adores the shapes of cooling towers although they serve an industry that might destroy us. The smoke form the chimneys give her an excellent opportunity to create amorphous shapes. Traffic jams form colourful strings through the scenery. The bunker often returns in her work. Bunkers fascinate Ilona: they are strange forms in a landscape. They are in contrast with their natural environment, looking at their robust shapes and war histories. The Colosseum is also a recurrent theme in her work. It shows up in her sculptures over and over again, in a simplified form. Like a fragment of The Tower of Babel with its babylonian confusion of speech. Animals symbolize mankind like in a fable when they appear in her work.
Ilona graduated at the Royal Academy of art in The Hague as monumental designer. She teaches fine arts besides her job as an activity-coordinator in a nursing home. In the latter, a couple of questions make her wonder. For example: who is this dependent person that has to live in a nursing home for the rest of their life? How does our society treat these people? It is in these kind of questions that Ilona finds contradictions, which she looks at as challenges to portray in her work.

You don't have permission to register